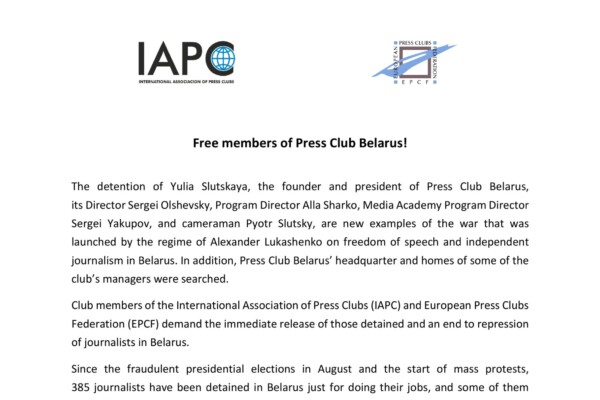 The detention of Yulia Slutskaya, the founder and president of Press Club Belarus, its Director Sergei Olshevsky, Program Director Alla Sharko, Media Academy Program Director Sergei Yakupov, and cameraman Pyotr Slutsky, are new examples of the war that was launched by the regime of Alexander Lukashenko on freedom of speech and independent journalism in Belarus. In addition, Press Club Belarus’ headquarter and homes of some of the club’s managers were searched.

Club members of the International Association of Press Clubs (IAPC) and European Press Clubs Federation (EPCF) demand the immediate release of those detained and an end to repression of journalists in Belarus.

Since the fraudulent presidential elections in August and the start of mass protests, 385 journalists have been detained in Belarus just for doing their jobs, and some of them are still imprisoned.

We convey to all repressed Belarusian journalists our utmost respect for their attitude, solidarity and support. Journalists around the world are requested to monitor the situation and keep the public informed about the situation.