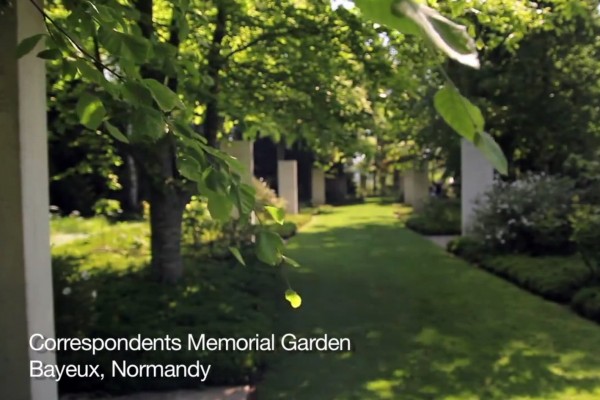 In the summer of 1944, John Morris, picture editor for Life magazine based in London, decided that he wanted to go to Normandy to see for himself the aftermath of the D-Day landings on June 6. Robert Capa, Henri Cartier-Bresson and other photographers under his wing were nearby so Morris borrowed a Rolleiflex camera at the last minute as he set sail for the now-secure beaches of Normandy.

Morris said that he was not a photographer, but as an editor he knew all about a good picture. He took photos of people who had endured occupation and deprivation by the Nazis and bombings mostly by the Allies and yet they turned out with joy to welcome the liberators. Morris captured the mood, the devastation of the towns, the interaction of American soldiers with the children, and the work of the journalists on the ground. The photography book Quelque Part en France (Somewhere in France) was launched at the Musee de la Bataille in Bayeux, Normandy, on May 16.

Morris spent about a month in Normandy, but he did not offer the pictures to Life magazine because he did not want to be seen as competing with professional photographers. So these pictures sat in his apartment in Paris in a bottom drawer for 69 years until Robert Pledge, photo editor of Contact Press Images, saw them and decided that a book should be published in time for the 70th Anniversary of the D-Day Landings.