IAPC Freedom of Speech Award 2018 for The Guardian 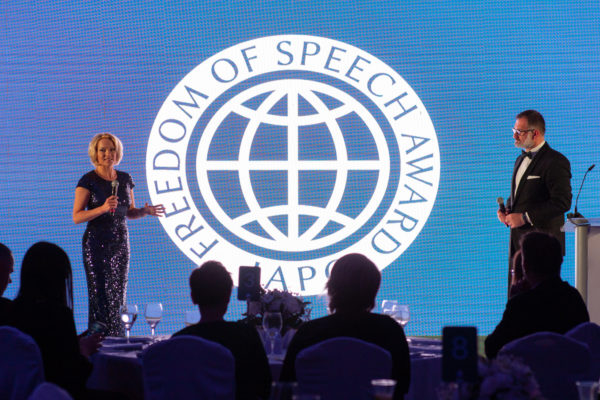 The Guardian was awarded in recognition of groundbreaking stories on the digital exploitation of vulnerable personal data and for unflagging sensitivity to global threats to the freedom of speech.

The IAPC confers the Freedom of Speech Award on persons or organisations for their exceptional contributions to the fight for or in defence of free speech, or for creating conditions and supporting efforts that promote freedom of speech.

The IAPC believes that freedom of speech is one of the fundamental human rights. It stands for the right of a person to publicly express his or her views and the respect of the others for these views. However, only one in six people can exercise this freedom without any consequences. In many countries the journalists, bloggers, politicians, human rights activists and even ordinary citizens are persecuted for exercising or merely advocating this freedom. Currently, various annual reports on press freedom present the worst indicators since the decades.

The winner of the Award is selected by more than 40 press clubs from over 20 countries. The winner receives a medal of freedom of speech. This year a laureate was announced on the 22nd of May during the Press Club Awards Gala in Warsaw, Poland.

It was in Poland that the fall of communism in Europe began. It was in Poland, on June 4, 1989, that the region’s first free election was held. That election initiated a process that led to the liberation of the countries of Eastern and Central Europe, the fall of the Berlin Wall, the collapse of the Soviet Union and – as a result – the eastward expansion of the European Union. That is why the International Association of Press Clubs (IAPC) selected Poland to host the Freedom of Speech Award ceremony, emphasising Poland’s role in the struggle for free speech around the world and its enormous contribution to the democratic transformation of Europe.

The former laureates of IAPC Freedom of Speech Award include Reporters Without Borders, Alexey Simonov, Peter Greste, Mohamed Fahmy, Baher Mohamed as well as the “imprisoned and oppressed independent Turkish journalists”, who received a collective, symbolic award in 2017.