Israeli Cartoons Competition in the Wake of Charlie Hebdo 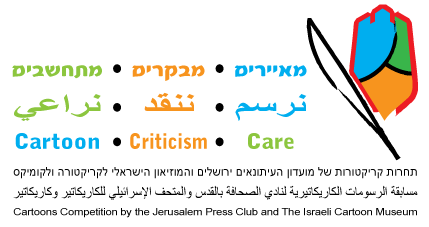 The Jerusalem Press Club (www.jerusalempressclub.com) and the Israeli Cartoon Museum have launched a competition among high-school students in Israel, for the best cartoons dealing with the issues of how to relate to the Other, to the Different, to the Believer in other religion.

The terrorist attack on the French magazine Charlie Hebdo raised several questions: How to balance between criticism of religious and social institutions and personalities and the need not to hurt religious feelings too much? Should the freedom of the cartoonists be limited, because of the impact of their work by certain audiences? Adults have been debating this heatedly. Maybe the youth, with their fresh outlook, expressed artistically in cartoons, could come up with surprising ideas.

The competition, titled “Cartoon, Criticism, Care”, with world renowned cartoonists as jury, resulted in an exhibition in Jerusalem, displaying the best 20 cartoons. The exhibition will open on January 6, 2016, 18:00 on the eve of the first anniversary of the attack on Charlie Hebdo.

Following you will find the 3 winning cartoons. Feel free to publish any of them, with credits to the artist, The Jerusalem Press Club and the Israeli Cartoon Museum. 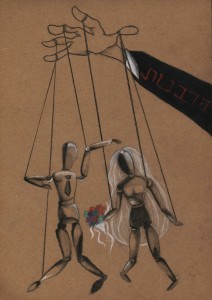 It is common knowledge that in Israel, in order to be recognized as a married couple, and to get married in the first place, people have to marry under the auspices of the Chief Rabbinate. However, the Israeli population includes people who are not Orthodox and who – as equal citizens – would perhaps wish to marry in different ways. The cartoon illustrates the monopoly the Rabbinate holds in all matters pertaining to marriage, and the fact that many of those who marry in the Rabbinate are not doing so willingly, but rather act as marionettes so that they can marry their loved ones and be recognized as a married couple. 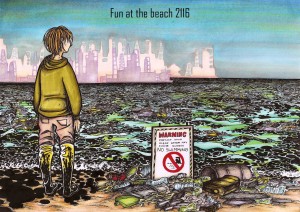 This cartoon criticizes the people and the institutions that contribute to the pollution of the sea. People throw their garbage into the sea without a second thought, and industrial plants are polluting it with their waste, toxic materials and oil spills. However, in the spirit of the competition, instead of showing explicitly the people who cause this pollution and thus insulting them, I chose to criticize them in a different way, by showing the results of their irresponsible conduct. That’s why I chose to illustrate in the cartoon the “fun” which people will find on their beaches in 2116. 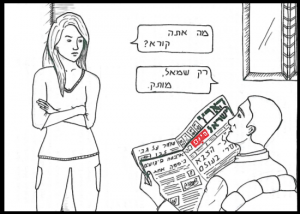 In this cartoon, I try to show the insecurities people feel in expressing their views, even to those closest to them. By pretending to read high-brow elitist Haaretz while actually reading popular Yisrael Hayom, the man hides from his partner the views with which he really identifies and presents another face outward.