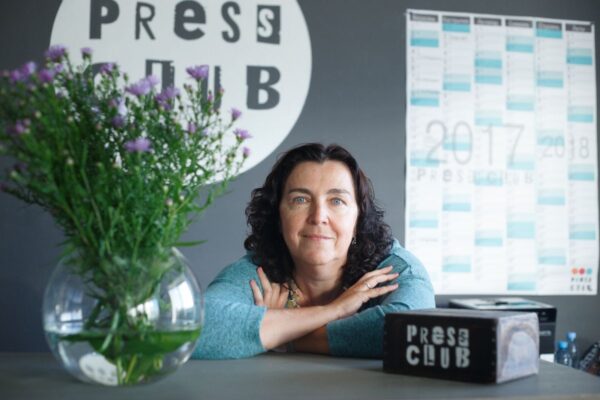 Yulia Slutskaya and three staff members of Press Club Belarus were detained on December 22. Despite paying a fine, they are still being held and have been remanded in custody in Minsk until at least June 23. Human rights organisations consider them to be political prisoners.

Yulia Slutskaya, the founder and president of Press Club Belarus, Sergei Olshevsky, the club’s director, Alla Sharko, program director and cameraman Pyotr Slutsky were detained on December 22, 2020. Searches were conducted at the press club office and at the homes of Slutskaya, Olshevsky, Sharko and Programme Director of the Press Club Academy, Sergei Yakupov. Security officers seized computers, phones and bank cards. On December 31, Slutskaya, Olshevsky, Sharko and Slutsky were charged for tax evasion. Yakupov was deported to Russia on December 31 and forbidden to enter Belarus for 10 years; no charges have been made against him.

It should be noted that this is not the first time that the Belarus authorities have used the economic structure of crimes for repression. In recent years Ales Bialacki, the president of the “Viasna” Human Rights Center, Gennady Fedinich, leader of the independent trade union REP, Ales Lipai, head of the BelaPAN news agency and others were prosecuted on charges of tax evasion for political reasons.

A fine of approximately $40,000 was imposed on the Press Club and those who were arrested. With an average monthly salary of $500, family members were forced to sell their properties to pay off the fine. However, payment of the fine did not secure their release from custody.

All four detainees are living in harsh conditions in overcrowded cells, with limited access to walk in a small, concrete courtyard only on selected days. They also do not have access to media and information, and correspondence arrives only after a long delay.

Many international organizations focused on freedom of speech and human rights are protesting the detention of members of the Press Club Belarus. The International Association of Press Clubs, European Press Clubs Federation, European Federation of Journalists and Committee to Protect Journalists demand the immediate release of those detained and an end to repression of journalists in Belarus.

Human rights organizations in Belarus on January 14, 2021 issued a joint statement recognizing the accused in the “press club case” as political prisoners.

In a letter sent from custody, Yulia Slutskaya told her associates: “not to give up and keep on going”. Some of the management and members of the Press Club, fearing for the safety of themselves and their families, are leaving Belarus and going to neighboring countries and will continue projects from abroad.

Press Club Belarus is continuing its project “Press Under Pressure”, to monitor and report repression against independent media and journalists in Belarus.