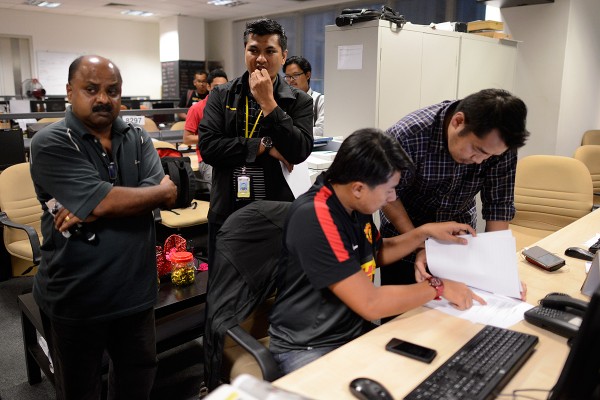 We note with grave alarm that our colleagues at The Malaysian Insider (TMI), including the publisher of The Edge Media Group, have been arrested by police apparently to aid investigations over a report published on March 25 concerning the Conference of Rulers and a proposal to amend laws concerning Islamic law.

We in no way vouch for the veracity of the article and welcome all stakeholders to hold journalists up to good ethical standards. Should there be any question of law, we accept that the police have a role to play in investigations.

But just as with previous arrests of media personnel, and the recent use of the Peaceful Assembly Act and Sedition Act against politicians, activists and even students, authorities have used unwarranted and high-handed tactics to intimidate those practicing their rights to freedom of expression and, in the case of these five journalists from TMI and Edge Group, their rights and ability to earn a living.

Authorities must ask if they are cracking down on alleged sedition, or merely “bad” reporting? If it is the latter, then it is sufficient to call on all witnesses and suspects to record their statements as there is no good reason to arrest and detain them overnight, much less to remand them for several more days.

No TMI personnel has tried to flee from investigations even from last week when police reports were first filed against the news portal. It is of great concern that the police are applying “preventive measures” to reporters, as if they were terrorists.

We call on all stakeholders and the general public to participate in a democratic society responsibly. With regards to a free press, all aggrieved parties should be given their right of reply and there are proactive civil methods we can engage in that are more productive and honest, than using blunt and misplaced brute force.

The police and judiciary must release the “TMI 5” immediately and conduct investigations in a manner befitting of institutions that underpins a vibrant and orderly Malaysian society that the FCCM has been proud to operate in.