Our ‘Cartoon-Criticism-Care’ competition is going global! 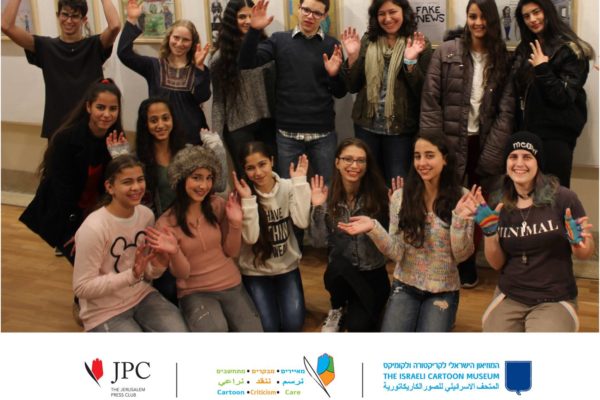 The Jerusalem Press Club held the opening of the third cartoon competition ‘Cartoon-Criticism-Care’ this past January.  The competition was founded in 2015 to commemorate the terrorist attack on Charlie Hebdo and encourage youth between the ages of 13-17 to critique the world around them.  This year’s theme was ‘Fake News’ and we were excited to receive dozens of thoughtful and creative cartoons.
Michel Kichka, the world renowned cartoon artist, said during this year’s competition: “All we have in our hands in order to resist the powers of darkness is a small sharpened pencil.  We will continue to use it with no fear and without hesitation! The cartoons here give us hope and prove that this competition is the answer to the global threats over freedom of the press and democracy.”
Due to the success of the competition in Israel and following the agreement and discussion with our partners at the EPCF and IAPC, we will be opening next year’s competition globally in cooperation with the press clubs worldwide.  This will provide an opportunity for youth worldwide to participate in the ‘Cartoon-Criticism-Care’ competition, express their opinions and critique the world around them.
In order to be able to go global, the Jerusalem Press Club have launched a crowdfunding campaign! The campaign is live right now and will be online until the end of March 2018.
Please check the campaign page, choose your favorite perk from the wide selection of creative gifts offered and support us!
For more information and to join our mailing list regarding the competition, please contact: Or@jerusalempressclub.com.
Click here to look at this year’s top 25 cartoons which were presented in our exhibition. Click here for a video tour of the exhibition on our JPC Youtube channel.
© Copyright 2022, International Association of Press Clubs. All press clubs names and logos are the property of their respective owners.