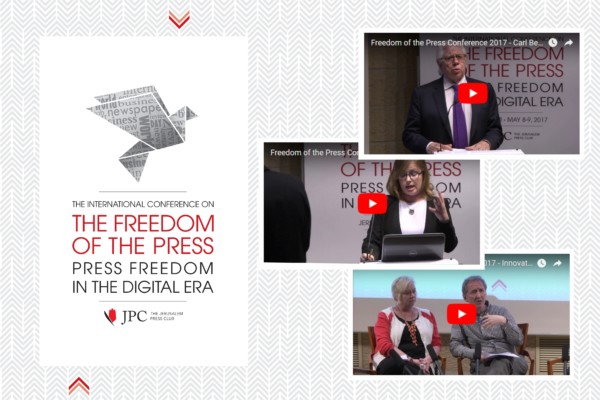 Speeches and debates from the International Conference on the Freedom of the Press “Press Freedom in Digital Era” organised by Jerusalem Press Club, 8-9 May 2017

Government-press relations from Nixon to Trump

by Carl Bernstein, Washington Post reporter, who, together with Bob Woodward, broke the Watergate story.

Governments and the Press: Friends or Foes

US President Donald Trump called the press “phony” and denied access to White House briefings; Turkish President Recep Tayyip Erdoğan throws journalists to jail; in Vladimir Putin’s Russia they are oppressed; and in Israel, according the RSF’s Press Freedom Index, the public broadcasting is going through hard time.

War Coverage in the Digital Era

Since William Howard Russell covered the charge of the Light Brigade in the Crimean War, war correspondents risked their lives to bring the realities of the battlefield to readers, viewers, and listeners. Many of them have paid with their lives in the line of duty, and wars only become more lethal. New technologies, including Artificial Intelligence, open new options for war coverage. Will it be the same?

Traditional media, particularly newspapers, suffer from the impact of structural and market changes, which have reduced the profitability of media enterprises. In response, severe cuts have been imposed in editorial departments, weakening the quality of journalism and sacrificed reporting standards in pursuit of commercial objectives, overriding ethical values with journalism that is populist, sensational, and biased. The rise of social media legitimizes the use of amateurs in a weakened traditional media industry.

Innovation & Freedom of the Press

More people than ever are getting their news via their smartphones, and some from their smartwatches. The Cards system, which integrates designers, editors and technical people, provides visual presentations to make social media more appealing and effective. But guidance has shifted from the editorial board rooms to corporate headquarters, and governments have new ways of becoming Big Brother. How can we maintain press freedom in such a turbulent era?

Been under attack: Public broadcasting has been subject to pressure from the government, a publisher schemes with the Prime Minister to offer positive coverage for economic gains, and there were calls to boycott the liberal Haaretz newspaper because of a certain opinion piece.

Press Freedom under Trump and Netanyahu

Dalia Dorner, Israel Supreme Court Judge Emeritus and President of the Israeli Press Council, will give introductory remarks to a panel where two leading experts discussed the new challenges to press freedom in the United States and Israel: Professor Frederick Lawrence, former President of Brandeis University and an expert on freedom of speech, and Professor Mordechai Kremnitzer, Professor emeritus at the Faculty of Law at the Hebrew University of Jerusalem and the Vice President of The Israel Democracy Institute.