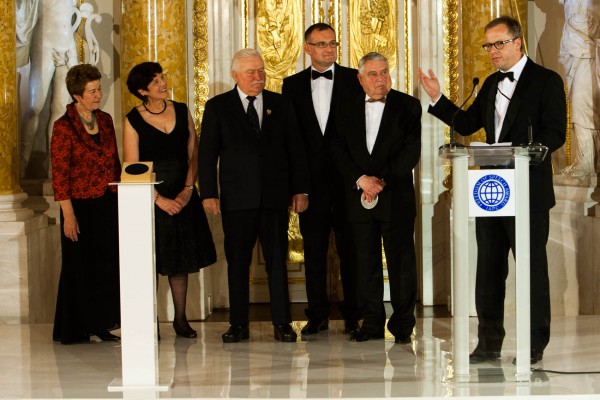 Reporters Without Borders received on June 4, in Warsaw, the Freedom of Speech Award by the International Association of Press Clubs (IAPC). This organization, representing thirty Press Clubs in twenty countries, awards this prize for the first time to “people or organizations” recognized for their “outstanding contributions to the defense or the struggle for freedom of expression, the creation of conditions to support freedom of speech.” Reporters Without Borders has been elected by the delegates of the Press Clubs among very prestigious nominees.

The presentation ceremony took place in the Great Assembly Hall of the Royal Castle of Warsaw. Lech Wałęsa, the legendary leader of “Solidarity” movement and the former president of Poland were in attendance along with the chairman of IAPC. The award was collected by the president of Reporters Without Borders International Gerald Sapey and the organisation’s general secretary Christophe Deloire. A part of the award ceremony was the first public screening of scenes from the movie Wałęsa and a meeting with its director, Andrzej Wajda, who spoke about the limits on free speech in Polish cinema under communism .

“We are very proud to receive this award from the International Association of Press Clubs, especially in a country, Poland, where we do not ignore the value of journalists’ courage against despotism. As the famous Polish journalist Ryszard Kapuscinski once wrote, ’silence is a sign of misfortune, and often crime’. Around the world, the forces of silence and propaganda are very powerful. This award encourages the entire team of Reporters Without Borders and our correspondents in 130 countries to continue our fight to defend dissent voices” said Christophe Deloire, general secretary of Reporters Without Borders.