The 2014 Lech Walesa Award to the Euromaidan 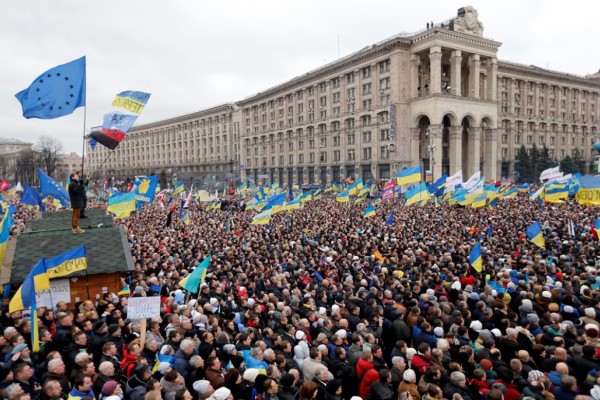 The 2014 Lech Walesa Award Winner (7th Edition) is the informal Euromaidan social movement. ‘This expresses our solidarity with and support to democratic and pro-European aspirations of the whole Ukrainian people’, says the Award’s patron, President Lech Walesa.

The Chapter has decided to present this year’s Lech Walesa Award to the Euromaidan social movement, a symbolic representative of the Ukrainian Sovereign, in order to ‘honour the consistency and determination of thousands of Ukrainians who despite the awareness of the undertaken risk openly expressed their pro-European as well as pro-democratic aspirations and began struggling to change the socio-political situation in their country. While opposing democracy violations and restrictions on their self-determination, the Euromaidan movement carried high banners proclaiming universal values of freedom and human dignity, thus giving way to establishing a democratic state’, reads the official justification for this year’s choice.
The Lech Walesa Award is a prestigious international honour awarded to individuals, institutions, and social movements acting to promote cooperation among nations and respect for human rights. Established in 2008 by Lech Walesa, it has served as a token of appreciation for the support he had received when winning the Nobel Peace Prize in 1983.  ‘This year’s Award differs from the previous ones, as it is not presented to specific individuals, but to the whole movement which gave hope to the Ukrainian people. It expresses our solidarity with the democratic and European aspirations of our neighbours. Those people, as much as violently attacked and persecuted, did not give in. However, today’s situation in Ukraine is even tougher, that’s why we have to provide the Ukrainians with any possible support, the kind we received from the free and democratic world‘, President Lech Walesa accounts for this year’s choice.
The representatives of the Euromaidan movement selected to receive the Lech Walesa Award  are: Olga Bogomolets, Ukrainian singer and doctor, organizer of Euromaidan medical services; currently President Poroshenko’s advisor; Dmytro Bulatov, one of the leaders of the AutoMaidan; currently Minister of Youth and Sports in the Yatsenyuk Government; Tetiana Chornovol, an investigative reporter; currently advisor to Ukraine’s Minister of Internal Affairs; member of the voluntary Azov battalion; Dmytro Gnap, a correspondent reporting to Ukrainians and the world about the events at the Euromaidan; one of the founders of Hromadske TV; Arseniy Yatsenyuk, a politician, currently Ukraine’ s Prime Minister; Vitali Klitschko, a boxer, politician, currently Mayor of Kiev; Ruslana Lyzhychko, a Ukrainian singer and star, politician, Euromaidan participant since the outbreak of protests; Yevhen Nyshchuk, master of ceremonies during the 2004 Maidan Orange Revolution and Euromaidan, currently Minister of Culture in the Yatsenyuk Government; Andriy Parubiy, coordinator of the Euromaidan self-defence, former Secretary of National Security and Defence Council of Ukraine; Oleh Tyahnybok, a politician, leader of the Svoboda Party.
‘Ukrainians have been fighting for their freedom and right to decide about the future of their nation for close to a year now. The international community’s response is extremely importance for them. The award of The Lech Walesa Prize to the ‘Euromaidan’ social movement stands as an expression of our support for the aspirations of the Ukrainian society to transform their country into a truly democratic state. I am convinced that this Prize – symbolic of a great idea and a dream attained – can also act as a moral support for our neighbours during this difficult transformation period’, said Zbigniew Jagiełło, President of PKO Bank Polski.

The Award Chapter
The Award will be presented for the 7th time to the Winner selected by the Chapter chaired by President Lech Walesa and including world renown personalities: Stanislav Shushkevich, former Chairman of the Supreme Soviet of the Republic of Belarus; Jan Krzysztof Bielecki, Poland’s former Prime Minister; Bernard Kouchner, France’s former Minister of Foreign Affairs; Władysław Bartoszewski, Poland’s former Minister of Foreign Affairs; Emil Constantinescu, Romania’s former President; Rita Suessmuth, former President of the Bundestag; Mikuláš Dzurinda, Slovenia’s former Prime Minister; and Zbigniew Jagiełło, President of PKO Bank Polski.
The Award presented as part of the ‘Solidarity for the Future’ Programme run by the Lech Walesa Institute, annually brings together illustrious visitors from Poland and around the globe. ‘This year we are celebrating an exceptional jubilee of the 25 years of the Polish transformation. When rejoicing in our success, we can’t fail to notice those who haven’t been as lucky as we have. Therefore the Lech Walesa Institute has been running the ‘Solidarity for the Future’ Programme within which we try to share our Polish experience in establishing a democratic state with the world. Such an important and symbolic Award, as well as our numerous educational programmes, help promote the message of Solidarity throughout all corners of the world’, emphasizes Piotr Gulczyński, President of the Board of the Lech Walesa Institute. ‘Today we feel particularly obliged to share this Polish lesson with the Ukrainian people’, he adds.
It is for the last time that the Lech Walesa Award will be presented in its current format. As of 2015, the Lech Walesa Solidarity Award will be given annually – it is a fusion of the Solidarity Award of Poland’s Minister of Foreign Affairs founded in 2014 and the Lech Walesa Award presented since 2008.
The ceremony of the Lech Walesa Award presentation was held at Gdansk’s Artus Manor on 29 September.

Former editions (2008-2013)
Up to-date the Lech Walesa Award has been presented six times, subsequently to the following:

More information available at the websites of the ‘Solidarity for the Future’ Programme: www.solidarnoscdlaprzyszlosci.pl