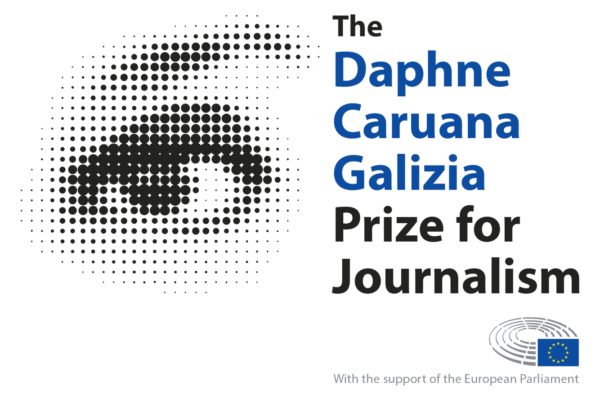 Thursday 14 October 2021, the Daphne Caruana Prize for Journalism was awarded to the journalists from the Pegasus Project coordinated by the Forbidden Stories Consortium.

From 22 June to 1st September 2021, more than 200 journalists from the 27 EU countries submitted their media stories to a panel of judges.

Representing the 29 members of the European jury, the Secretary General of the International Federation of Journalists, Anthony Bellanger, presented the 20.000 EUR prize money to the representatives of the consortium, Sandrine Rigaud and Laurent Richard.

The prize is organised by Press Club Brussels Europe.

Forbidden Stories is a consortium of journalists whose mission is to continue the investigations of murdered, imprisoned or threatened journalists.

Since its inception in 2017, Forbidden Stories and its partners have pursued the work of Daphne Caruana Galizia, but also of journalists murdered for their investigations into environmental crimes or Mexican cartels.

About the winning story

Short summary of the winning story:

Journalists from the Pegasus Project – more than 80 reporters from 17 media organizations in 10 countries coordinated by Forbidden Stories with the technical support of Amnesty International’s Security Lab – sifted through these records of phone numbers and were able to take a peak behind the curtain of this surveillance weapon, which had never been possible to this extent before.

The Forbidden Stories consortium discovered that, contrary to what NSO Group has claimed for many years, including in a recent transparency report, this spyware has been widely misused. The leaked data showed that at least 180 journalists have been selected as targets in countries like India, Mexico, Hungary, Morocco and France, among others. Potential targets also include human rights defenders, academics, businesspeople, lawyers, doctors, union leaders, diplomats, politicians and several heads of states.

The Daphne Caruana Prize was initiated by a decision of the Bureau of the European Parliament in December 2019 as a tribute to Daphne Caruana Galizia, a Maltese anti-corruption investigative journalist and blogger who was killed in a car bomb attack in 2017.

The Prize is rewarded on a yearly basis (on the 16 October, the date Daphne Caruana Galizia was assassinated) to outstanding journalism that promotes or defends the core principles and values of the European Union such as human dignity, freedom, democracy, equality, rule of law, and human rights. This is the first year the prize has been awarded.

The prize and the €20 000 prize money demonstrates the European Parliament’s strong support for investigative journalism and the importance of free press.